Most Popular Strategies for Trading CFDs and Binary Options

There are many different strategies to trade binary options. This allows each investor to carry out an individual approach that suits them best.

Let us discuss a strategy that allows as risk-free trade as possible due to the fact that traders buy two options in Option+ mode at the same time in different directions, and then sell one option in order to benefit from each.

For those who do not know: according to the standard binary options rules, traders can make a deal and leave as an option will expire in due time.

This feature, when a trader can sell an option before expiry time is called Early Closure.

With forex or CFDs trading there is no early close since its up to trader to decide – all the trader needs to do is close their position, without any penalties. The loss is derived from the difference and leverage. This way this strategy might make even more sense since the loss due to the penalty (25-30%) is non-existant with CFDs!

Traders then wait for the second option in order to receive the largest possible amount, which not only covers 10-25% loss of the previous option but brings profit over. Ideally, of course, one must wait for the expiration and get the maximum profit. Incidentally, there is a chance to sell both options in profit – for example the price will go down sharply and trader sells a “put” option at a profit, and then the market will turn and run trading above the purchase – in this case, trader will also get a profit for the second “call” option. This method of trading has positive and negative sides. Among the positive characteristics are the highest level of reliability strategies and less time consuming.

This strategy is based on the use of probability theory, the principle of Kelly, as well as the method of Martingale. Probability theory says – after a coin thrown up several times fell tails up, the following should drop on heads. As applied to trade, it looks way set out below.

Let us consider an example of statistics, when the probability that a half-hour candle moves in the opposite direction, was significantly increased if the previous three candles were going in the same direction.

The maximum number of candles moving in the same direction, according to statistics is eleven pieces. The greatest likelihood of movement in the other direction appears after the third candle, but sometimes it comes from a fifth to the seventh. In 50% of cases, the movement of the candles in the opposite direction takes place on the fourth candle, about 25% of cases – on the fifth, and 10 to 15% in the sixth. The remaining percentage, that is about 10%, accounted for all of the remaining cases; however, more than eight consecutive candles happen very rarely.

How to use this information to trade CFDs and Binary Options?

Traders need to purchase an option of a certain type or execute a buy/sell order only after a few candles go in the same direction. The rate will be calculated using the principle of Kelly. The principle includes the accounting value of the deposit belonging to the trader, the total number of candles and the fact that the purchase price shall be increased by the principle of the Martingale.

It should be noted that the maximum rate of some brokers may be limited. The strategy called Strangle is often used to trade options. This strategy allows simultaneous use of “call” and “put” options on the same asset base and the same expiration. The simultaneous purchase of “put” and “call” options with different strike prices can be quite lucrative, of course, as a subject of certain developments.

In most cases, Strangle buying depends on predictions about what will happen in the asset market.

It is best to purchase Strangle when the prices of the underlying assets have to start moving. Moreover, the movement must be really significant, regardless of the direction.

Buying a Strangle means the opening a position for the “call” and “put” options with different strike prices. This strategy is used to generate income from the increase or decrease in the price of the underlying assets. The successful operation of the strategy is due to price release over a specific border corridor. In the event that the trader forecast was wrong, his loss will be only the amount of premiums paid for the options.

Straddle strategy is very similar to the strategy described above. The difference lies in the fact that at the time of its use, traders buy options with the same strike price. The price of a Straddle equals a few Strangle prices. This means that Strangle using is cheaper. However, bear in mind that the amount of profit from Strangle will be much less. 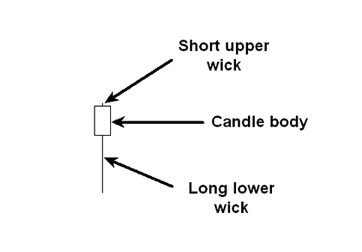 This strategy is easy to apply for quick money and is often recommended for beginners with no experience in financial market trading. In addition, this approach is effective in profits extracting and can be used not only for binary options trading but also for currency pairs with Forex CFDs. Also, considering the market of commodities and indexes, such a behavior of the graph is quite common, as it is possible to use this approach to trading for immediate benefit.

Let’s take a look at necessary components, from which we obtain Pinocchio strategy:

So the question is how the trader can detect Pin-bar (the term Pin-bar is short for Pinocchio bar) or Pinocchio strategy? Let’s try to explain with an example of candlesticks chart of EURUSD currency pair on the half-hour period. Pin-bar must always have a long thorn or the second name – a shadow, which is a nose of Pin-bar and it is directed against the trend. It is recommended to adopt pronounced Pin-bars for greater profitability and confidence. Another detail: the body of the Pin-bar should be as short as possible and you need to be sure to observe the direction of the price curve.

Buying or selling of an option should be carried out when the third candle goes up or down, blocking the body or the shadow of the pin bar. This is a hint or signal of a profitable trade.